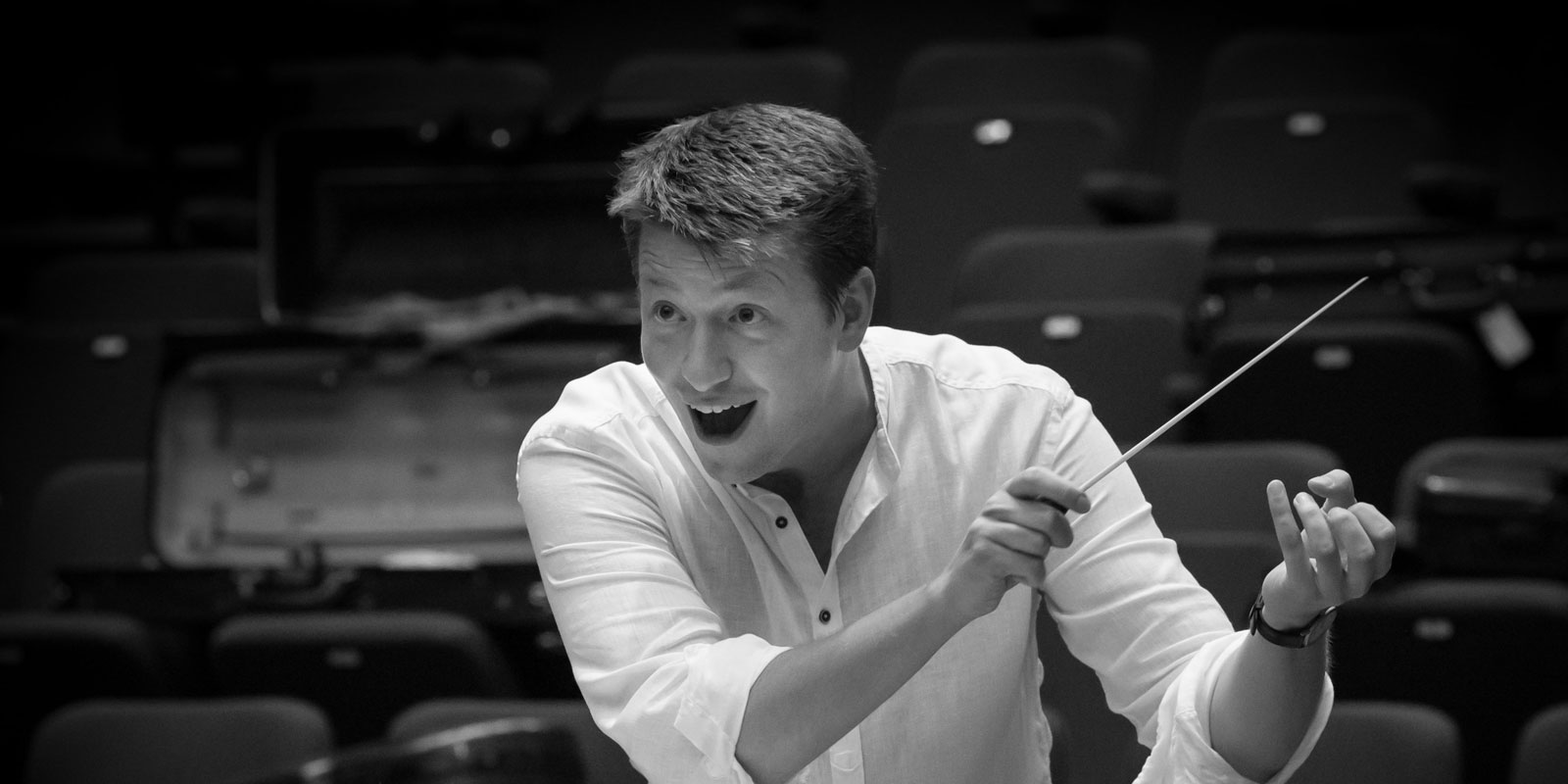 British conductor Duncan Ward has established himself as one of the most exciting and versatile conductors of his generation and enjoys working regularly with some of the leading ensembles and opera houses. Recent highlights have included engagements with the Orchestre de Paris, Symphonieorchester des Bayerischen Rundfunks, London Symphony Orchestra, Swedish Radio Symphony Orchestra, Bamberger Symphoniker, BBC National Orchestra of Wales, Deutsche Kammerphilharmonie Bremen and a return to Glyndebourne on Tour conducting Brett Dean’s acclaimed ‘Hamlet’.

From 2012-14 he was Conducting Scholar of the Berliner Philharmoniker Orchester-Akademie, to which he was appointed on the recommendation of Sir Simon Rattle. And from 2015-2017, he was Principal Conductor of Sinfonia Viva – one of the UK’s most dynamic and versatile ensembles. He also held the post of Associate Conductor of the National Youth Orchestra of Great Britain.
Plans for the 2018/19 season include debuts with the Frankfurt Radio Symphony, Orchestre National du Capitole de Toulouse, Rotterdam Philharmonic, Munich Chamber Orchestra, Royal Liverpool Philharmonic Orchestra, Orchestre de Chambre de Paris, Münchner Rundfunkorchester and the Royal Philharmonic Orchestra. He will also return to the Orchestre de Paris to make his subscription debut, Scottish Chamber Orchestra, Radio-Symphonieorchester Wien at the Musikverein and conduct a new production of Massenet’s Cendrillon for Glyndebourne on Tour.

Praised equally for his ‘viscerally exciting’ performances of Beethoven and Haydn symphonies as his committed and sensitive interpretations of demanding new works, Duncan is passionate about a hugely wide-ranging repertoire. He is as at home working with period instrument ensembles such as Balthasar Neumann, elite chamber ensembles such as Deutsche Kammerphilharmonie Bremen and the major symphony orchestras of the BBC as directing the world’s foremost contemporary music ensembles like Ensemble Modern. This is not to mention his acclaimed work with the homeless performers of Streetwise Opera, including a special performance at the Royal Opera House as part of the London 2012 Olympics Festival, or directing 500 amateur musicians in a supersize Riley 'In C' at the Elbphilharmonie, Indian classical collaborations with Anoushka Shankar, and with celebrated Nordic folk band Dreamers' Circus.
Operatic engagements have included Dutch National Opera for a double bill of Bernstein’s Trouble in Tahiti and Macmillan’s Clemency, Don Pasquale, Cendrillon and Hamlet for Glyndebourne-on-Tour, La Traviata at Baden-Baden Festspielhaus, the Chinese premiere

of Peter Grimes with a stellar international cast and London Voices, Saariaho’s La Passion de Simone at Deutsche Oper in a new production by Peter Sellars, a Barber of Seville for young audiences at the Salzburg Festival, a chamber version of Manon Lescaut with the Berliner Philharmoniker at the Baden-Baden Easter Festival, and opera galas with singers from Venera Gimadieva to Rolando Villazon.

Opportunities during his two years at the Berliner Philharmoniker included assisting and rehearsal conducting for Die Zauberflöte, Gurre-Lieder, Die Walküre, Le Grand Macabre, Britten’s War Requiem, G.F.Haas ‘in vain’ and premieres by Wolfgang Rihm and Benedict Mason. He additionally conducted the Britten 100th Birthday concert with members of the Berliner Philharmoniker and Ian Bostridge, a Webern concert and production of ‘Kleine’ Manon Lescaut with the Principal Players of the orchestra at their Baden-Baden Easter Festival, and a special concert 'Violins of Hope' with the Berlin Philharmonic Strings to mark the 70th anniversary of the liberation of Auschwitz.

Following a month working in India in 2006, Duncan subsequently co-founded the WAM Foundation which sent young UK musicians each year to teach Western classical music in schools across Delhi, Mumbai, Kolkata and Kerala. The charity attracted the attention of the great late Ravi Shankar, who invited Duncan to study with him in California in 2010. Duncan is also closely involved with the South African charity MIAGI (Music Is A Great Investment) and, to celebrate the centenary of Nelson Mandela’s birth in 2018, led the MIAGI Orchestra on an acclaimed summer festivals tour which included concerts at the Concertgebouw in Amsterdam, Elbphilharmonie in Hamburg and the Berlin Konzerthaus.

Also an accomplished composer - winner of the 2005 BBC Young Composer of the Year – Duncan is now published by Peters Edition. Recent composing highlights include arrangements of Dvořák songs for performances given by Sir Simon Rattle and Magdalena Kožená (performed in cities across Europe), an orchestral work for the LSO featured on their recent CD release of Panufnik Scheme Highlights, a commission for the Bamberger Symphoniker, and a theatrical version of We’re Going on a Bear Hunt performed by members of the National Youth Orchestra at the Southbank’s Imagine Festival in 2014. His works have also been performed by groups such as the Endymion Ensemble, BBC Singers and The Sixteen. He was appointed Composer for Coutts Bank's Family Business Awards in 2008.